Out of curiosity and 2.5 years ago, I analysed the network of Swiss GIS twitterers (article in German, French, Italian). That analysis inspired the creation of the GeoBeer event series (of which we had the 11th instalment just a few days ago) and the Twitter list by the name of ‚SwissGIS‘. You can find that one here.

If you follow my private blog, you might have seen that I also made Twitter maps sometimes, e.g. here for GeoHipster (thumbs up for Atanas & Co.’s initiative!) and here for SwissGIS: 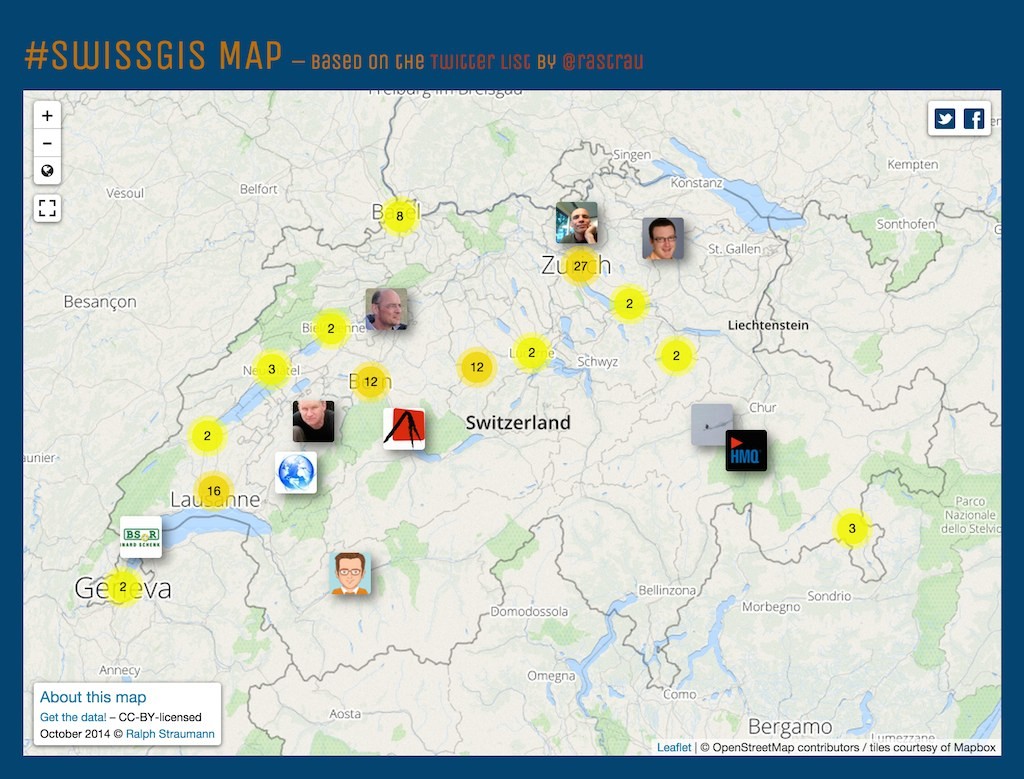 The day before yesterday I updated the SwissGIS Twitter map. In doing so I thought: heck, I should probably renew the old network visualisation of a few dozen Twitter accounts as well! I keep adding people to the list when I come across their accounts; hence the list has now grown to over 200 members.

So, I dusted off my Python code for querying the Twitter API, obtaining profile metrics and building the follower network between the accounts on the SwissGIS list. I plugged the resulting dataset into Gephi, configured the visualisation, and used the superb add-on by OII’s Scott Hale to export the whole shebang to sigma.js.

You can find the result by clicking here or on this graphic (best viewed on desktop, tablet also okay): 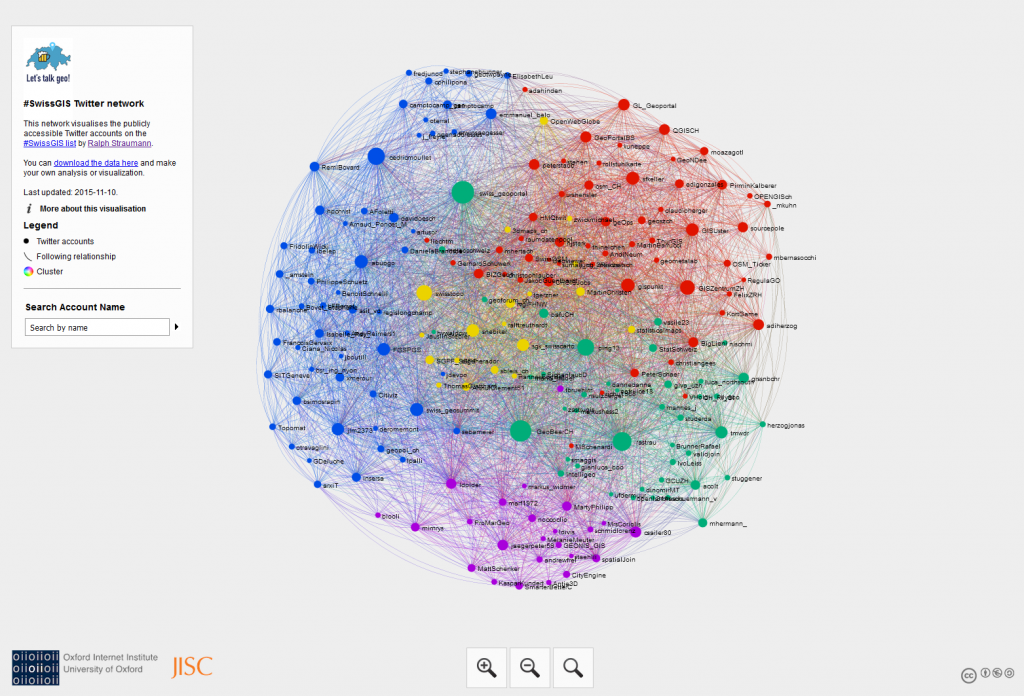 Each node in this network is a Twitter account. Links represent follower-relationships between the accounts, the link having the colour of the account that follows the other. The network is clustered into so-called modularity classes based on its topology. Similarly to the last time I plotted a (much younger) SwissGIS network, you can find, e.g., that the blue cluster encompasses mostly French-speaking Twitter users. Also similarly to last time, Esri Switzerland becomes a rather distinct and marked cluster (in purple) with very few errors of omission and commission. This is the inherent (and at times very revealing) power of networks and the strong homophily in all of us – also, the origin of concepts like that of the filter bubble.

The nodes in the visualisation are sized according to the number of followers a node or account has within the SwissGIS network. Not within Twitter at large! E.g., in ‚general Twitter‘, @swiss_geoportal has many more followers than @geobeerch, however, within SwissGIS the two are very similar regarding this metric.

Clicking onto a node reveals additional attributes such as the account name, the profile picture, the age of the account, number of tweets, and average number of tweets per month. It also shows mutual following relationships, which followers follow this account, and which accounts this account follows (both one-directional). The accounts in these lists are themselves clickable, i.e. you can navigate through the network via the users that are contained in it. There’s also a very basic search function that acts on account names for when you can’t find a user that you are interested in.

Importantly, Twitter accounts who were not accessible at the time of data collection (e.g., accounts that are configured to be private) cannot show up in this network, as – simplifying here – no data can be collected about them through the Twitter API.

Enjoy exploring the network of Switzerland-based geo and GIS enthusiasts. And shoot me a tweet or an e-mail if you discover anything interesting (or if you simply enjoyed the visualisation or this post)!

PS: You can easily subscribe to the SwissGIS Twitter list in, for example, Tweetdeck or Hootsuite in order to stay on top of geo/GIS news from Switzerland (expect a mix of (predominantly) English, German, French and a little Italian). By the way: following a list means you get to see all the tweets by the list members, whether you follow them personally or not.