From Swiss late winter to Southern California spring: My colleague Alex Graf and I attended the 2017 Esri Partner Conference and Developer Summit in Palm Springs two weeks ago. These events are always a great opportunity to get the latest information on Esri software and strategy as well as spend a week in an inspiring ‚geo-rich‘ environment. In this post, we summarize some highlights from the conference.

The motto of the Partner Conference and the Developer Summit was Esri’s new claim: „The Science of Where“. Yet what exactly is the „Science of Where“? In a nutshell: It uses location and technology to collect, analyze, visualize and share data and information to solve relevant problems. Or in Jack Dangermond’s words: „[…] The Science of Where is, quite simply, what we do.“ That „we“ includes us as geographers, data scientists, developers, and, of course, users of the ArcGIS platform. From that point of view I really like the slogan. Unfortunately (but understandably) Esri has trademarked it, so this won’t become an inclusive rallying cry for e.g. #gistribe.

The big trends in IT are of course also very relevant for GIS, and some were covered in depth at the Developer Summit: Distributed (GI) systems, real-time data streams, big data and the Internet of Things (a bit less than the other ones). Since a couple of years, Esri has been claiming to provide a distributed platform for GIS. While in the beginning this was more of a marketing claim than a working solution, we now welcome a phase where the claim becomes more and more credible. With ArcGIS 10.5, portal-to-portal collaboration is possible, for example, which allows you to connect different GI systems and share data across organizations.

Esri has also made a huge effort to enable their technology to work with ever bigger data, particularly data being transferred in real-time data streams. One outcome of this effort is the new spatio-temporal big data-store. The data store is not only capable of a much higher write-throughput (according to Esri about 50 times more events per second can be processed compared to a classical geodatabase); it can also be scaled across multiple machines in order to increase capacity. Esri also introduced their new offering for analytics: the GeoAnalytics server. It is intended for distributed analysis of massive vector and tabular data including temporal information. It should also be easily scalable and allow you to shorten the processing time of some of your analyses massively. Last but not least, visualization is also improved to work smoothly with big data (check out this tweet for an example).

All these improvements in technology will support the shift from simple GIS apps for displaying and querying spatial data to more advanced solutions that support advanced exploration, finding patterns and making predictions.

The technological advancement has of course implications for Esri’s product portfolio: Esri believes that using ArcGIS Server as a standalone software and accessing services via REST will be a less and less common practice. They expect that the typical user (if such thing exists) will rather use services via Portal for ArcGIS. Consequently, Esri has bundled ArcGIS Server together with Portal for ArcGIS,  ArcGIS Data Store and the ArcGIS Web Adaptor and gave this package the new product name ArcGIS Enterprise.

Moving the focus from server to desktop, another oldie you should start saying Goodbye to is the ArcMap/ArcCatalog combo. ArcGIS Pro is now not only the future but should also really become the present. If you haven’t already started working with it, you should definitely do that now! There will be another release for ArcMap, but that will be purely bugfixes. All new development goes exclusively into Pro. More importantly, feature equivalency will be „more or less“ achieved this year – note though: some ArcMap/ArcCatalog functionality might never be included in Pro. Just keep an instance of ArcMap available somewhere for that odd task that you can’t do in Pro, but use Pro for everything else. And there are of course more and more cool things that you could never do in ArcMap, for example creating vector tiles, now also in 3D! 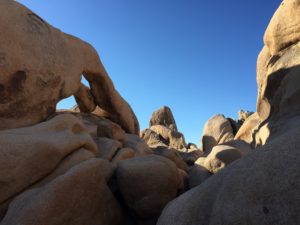 Some other cool stuff

Speaking of 3D: It was really one of the big topics at the Developer Summit (like every year to be honest – 3D provides really cool demos, doesn’t it? See this story map for an example). 3D is available across the Esri platform and all SDKs now support the same 3D capabilities. This means that you soon can use 3D scenes offline on a mobile phone! – and the performance during the demo looked exciting.

In 2016, Esri announced Insights which has now been released. It’s a browser-based tool for exploratory analysis of spatial and non-spatial data. It has similarities to business intelligence (BI) tools (cough, Tableau, cough, qlik, cough), but definitely with a stronger focus on geospatial analysis. Somewhat surprisingly, Esri stated that they don’t see themselves in competition with other BI tools. In any case, it will be interesting to see how Insights will establish itself in the market and where and to what ends it will be used (keep in mind that you’ll need an ArcGIS Enterprise installation to use Insights). For now the app works with vector and tabular data only. Support for raster data is announced for fall 2017.

Another newcomer is the ArcGIS API for Python. This API is much more powerful than the existing arcpy module and lets you script and automate all kinds of tasks across the Esri platform. Esri branded it (tongue-in-cheek) as the „return of AML“. This should delight at least one of my colleagues at EBP. There is also a completely new language called Arcade. Arcade is designed to formulate expressions (think for example, labeling) in a consistent way across the platform, something that was not possible with the options available now.

To finish off this post, let’s take an exciting look into the future: Watch this video of Esri’s HoloMap, a prototype app for Microsoft’s HoloLens: